Official Blog for the Society of Canadian Limnologists.

Accusations of bias no Smol matter

[The following post will appear as an Opinion Editorial in our upcoming issue of our newsletter, "The Current". Please visit back for the release of the latest issue next week. While you're there, check out some of our past issues as well.] 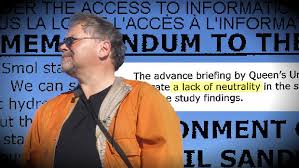 This summer, member John Smol was the focus of some surprising and unusual attention. Freedom of Information requests by journalist Tom Korski had unearthed internal government documents (dated Feb 8, 2013) authored by the then Deputy Minister to the Minister of Natural Resources Canada accusing Dr. Smol of “a lack of neutrality” in his communications around a paper he co-authored with a post doc in his lab (Joshua Kurek) and government scientists at Environment Canada, and bemoaned the level of media attention the paper received.

Dr. John Smol is among the most highly decorated and recognized scientists in the country. A past Rigler Award winner for his achievements in Limnology (1995), Dr. Smol is a Fellow of the Royal Society of Canada and an Officer of the Order of Canada, to abridge a long list of accolades and recognition for his outstanding work as a scientist.

The documents disclosing the accusations, while made internally, are telling of how both the government and industry have aligned their messaging on the issue (click here for the briefing and industry response). END_OF_DOCUMENT_TOKEN_TO_BE_REPLACED